I must admit that I've been waiting (and religiously following) the release of Microsoft's new mobile platform pretty much ever since they have announced it. I have fallen in love with the direction Microsoft was going with this device the first time I saw the initial hardware and software concepts. I'm all about simplicity and I feel that the new WP7 is THE definition of simplicity, even when compared to its biggest competitor, the well known iPhone. 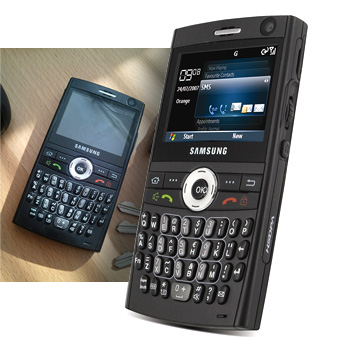 I've had my Samsung i600 ever since it was released about 5 or so years ago. Actually I've had 2, but after a little shower accident I had to get the first one replaced by the nice people at Omega Cell (Edmonton location). At the time Samsung has released the phone, it was pretty much top-of-the-line in smart phones. Running Windows 6.5 Mobile, having WiFi and dual cameras for teleconferencing (something that Apple has apparently "redefined" with iPhone 4 last year), etc this was truly a great phone. I was really impressed with the design, layout, features, how durable and high quality the i600 was, so I guess Samsung has done a good job at keeping me as their customer, hence why I have decided to purchase another Samsung phone as the i600 was getting old.

I LOVED the way the phone looked on all of the initial videos that Microsoft used to market Windows Phone 7, so I really wanted to get something that looks identical, or at least similar.

My brother was the first one to get a WP7 device. He bought himself an HTC HD7, which I didn't completely like at first. After using my i600 for so many years, the new HD7 seemed too big as it featured a very large (bigger than iPhone) 4.3" screen and to be completely honest, I didn't like the design of the phone at first (most of my purchases are based on how things look). I've patiently waited for someone to come out with a device that I really liked.

This is when out of all the hardware providers, Samsung came out with Omnia 7. Besides the fact that it looked very similar to the phone that Microsoft used to promote their new OS, to me this was the same durable and reliable phone that I have used for over 5 years, as it was made by Samsung. 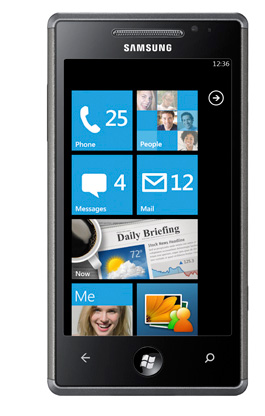 The size of the phone was just right and exactly what I was expecting. It's a little smaller than the HD7 and a little bigger than the iPhone, which makes it a easier to type, as the on-screen keyboard appears to be bigger as well. As far as I know it's also one of the thinnest WP7 devices currently on the market. Unlike most of the phones, it features a 4" Super ALMOLED screen (same one as iPhone 4), which offers more vivid colors, higher resolution, wider viewing angle and much better performance when viewed under direct sunlight. Overall, I'm quite happy with this phone. Having said that there are some things I don't quite like about it.

Things that should be changed (hardware).

The phone is actually a little on the "heavy" side (weight-wise) when compared to regular smart phones, which actually feels nice. Due to its weight and the materials used for the back of the phone (aluminum mostly), the phone becomes "slippery" to hold, which eventually leads to the phone falling in a plate full of food (true story). I really liked the rubbery finish on my old i600. Just like the HD7, the rubber finish prevents the phone from slipping so easily, plus it makes it a lot more durable and scratch/damage resistant.

In my opinion, the 2 buttons at the bottom of each WP7 device (back and search) should not be touch-sensitive at all. I find myself pressing the search button ALL the time while holding the phone, which leads to many opened Bing windows in IE.

Things that should be changed (software).

I absolutely love all the HTC prepackaged apps that came with my brother's phone. They are nicer looking and they work a lot better. In my opinion Samsung has definitely dropped the ball in this department. I am still waiting for the next big update from Microsoft and for them to come out with more apps (sound recorder, simple and light notes app -- I still can't get myself to use the OneNote for some reason, etc).

Zune. I don't know where to begin... I really want to like this program, but it's just a big bag of fail. Mostly usability problems that could have been easily avoided. Fact: it took me almost an hour to figure out how to transfer a song from my laptop to my phone. Having said that, Apple isn't much better with its iTunes.

Overall I am very pleased with my purchase, and although I am still getting used to it, I think it's a step in the right direction for both, myself and Microsoft. I have been using it a lot for work (almost all of the photos have been shot with the phone), which has already proven it to be a great investment on my part. I will be coming out with another follow-up post about some essential apps that any WP7 user should have as they are constantly changing. We are also bouncing an idea around with the guys over at Threefifty to start developing apps.